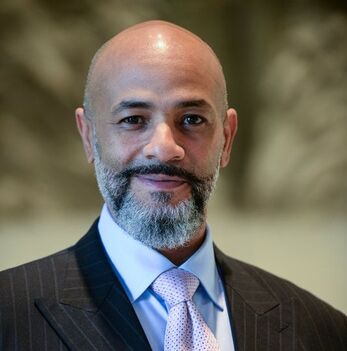 Richard McCaskill shaped his creative and business skills on Chicago’s Southside. Raised by a single mother, Richard learned to be self-reliant at an early age. By age 12, he could play the alto saxophone well enough to earn a scholarship to Roosevelt University’s merit program. By 15, Richard started his own promotions company and was promoting and producing “House Music” events.
At 17, McCaskill developed his leadership skills by joining the US Marines. Later, during the 1990 Gulf War, he served with Joint Special Forces in ANGLICO as an intelligence liaison and training advisor for Arab allies. On the battlefield, as an electronic communication specialist, he adapted communication technology for controlling combat air traffic. After the war which ended his six-year enlistment with the Marines, he started several ventures ranging from industrial imports to theater and art exhibitions along with general business consulting.
In 1998, McCaskill conceptualized and secured investor capital to fund an upscale supper club in San Diego’s Gaslamp District. The Juke Joint Café was quickly named Best Live Entertainment in San Diego and launched the career of todays’ number one jazz vocalist, Gregory Porter. McCaskill has always been a team builder with a sixth sense for forecasting business trends.  In 2000, he decided to focus his attention on building a company dedicated to talent and content development in the creative industries. He started by grooming local musicians into successful national acts, performing over 600 live shows in four years. This led to original music being placed on national television shows.

In 2007, Richard switched his focus from entertainment to the environment. McCaskill started Recon Recycling, LLC with no capital, finding everything he needed from the waste stream. Through sheer determination and hard work, he was able to build this award-winning company up to $1 Million in gross sales. During this time, Richard voluntarily trained inmates for one year at both R. J. Donovan Correctional Facility and Las Colinas Detention Center to start their own recycling companies. Ten businesses were started by former inmates as a result of this training program.

In 2010, Recon was awarded a three-year contract as an Environmental Consultant for the Unified Port of San Diego. In 2011, Richard was invited to survey the waste stream in Senegal, West Africa and proposed solutions to source-separated recycling. During this time, Recon launched an international recycling operation in Dakar, Senegal. In 2012, Recon won a contract with MCRD (Marine Corps Recruit Depot) to recycle their scrap metal and paper.  Recon recycled material from notable clients that include, ComicCon, Ikea, House of Blues, Raytheon and Thales. Recon has now evolved into an environmental consulting firm working with the County of San Diego and the State of California on Zero Waste initiatives and environmental policy engagement. Richard is solely responsible for changing the recycling laws in the City of San Diego (AB939) that would have excluded small recycling companies from participating in service fee collections.

Richard is also co-founder and partner of Fruition Consulting, a firm that increases companies’ visibility and profitability through business development, fundraising, conferences, and project management services.

​Richard has 20+ years of experience in business development, import/export, commodity brokering, and entertainment. His strategic plans and innovative solutions manifest market share. Richard served on the Board of the San Diego Youth Services for seven years and currently co-chairs the Small Business Opportunities Advisory Panel for the California Air Resources Board. The Board represents 3.4 Million small businesses in the state of California.
Contact Richard